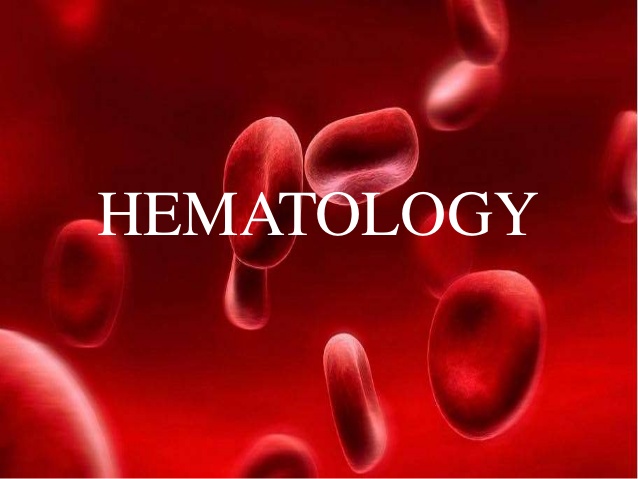 Hematology may be defined as the scientific study of the structure and function of the blood in health and disease. Hematology therefore is a laboratory science in which we observe the different components of blood to diagnose a great variety of diseases.

The plasma constitutes about 55-65% from the circulating blood. About 92% from the plasma is water. The remaining (6-8%) consists of plasma proteins (Albumin, globulins and fibrinogen), other biochemical constituents and minerals.

The cellular part or formed element:

The leucocytes and platelets are counted in thousands and represent from 1-1.5% from the circulating blood.

The shape of RBCs is biconcave disc in human and most animal species, except camel and birds, where the RBCs is oval. On the other hand, the RBCs are nucleated in birds and fish.

The neutrophils contain fine granules (granulocytes), which stain neutral (no stain), under the light microscope. The neutrophils are called polymorphonuclear, due to the different shapes of their nucleus.

The Eosinophils contain large granules, which stain red (Acidophilic or eosinophilic) with Giemsa stain. The eosinophils release chemicals that destroy parasites, especially those penetrate through the skin, lung and mucous membranes, or circulate in the blood.

The basophils are very rare in the blood circulation, contain basophilic granules, and their major function is to release histamine and heparin.

Platelets are fragments of the megakaryocytes at the bone marrow. The most important function of platelets is the stop of bleeding. When injury of the endothelial lining blood vessels occurs, the platelets adhere to the site of injury forming the platelet plug, then secret vasoconstrictor (Serotonin) to help decrease the blood flow to the site of injury, and then attract more platelets to adhere. During the process of hemostasis, the platelets secrete thromboplastin (platelets tissue factor), which initiate the process of blood coagulation by converting prothrombin to thrombin, the later activate the conversion of fibrinogen to fibrin threads, which make meshes on platelets and help to stop bleeding. The formation of excessive fibrin threads is prevented by the inhibitory effect of fibrin on thrombin.

The process of stoppage of bleeding is called hemostasis.

Questions and Answers in Hematology (1-10)!